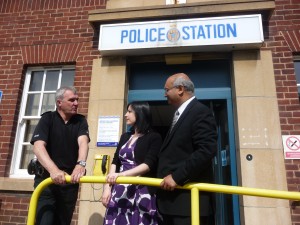 Houghton and Sunderland South MP Bridget Phillipson has hit out against Tory and Lib Dem plans to cut local police budgets by 20% in real terms over 4 years.

Bridget’s response comes on the back of Tory Policing Minister, Nick Herbert, denied the Coalition’s cuts would mean fewer Police and Police Community Support Officers on the beat.

Commenting to the press, Northumbria police said they were ‘committed to reduce the size of the police staff workforce by approximately 450 posts’, but stated this reduction ‘will not affect police officers’.

Bridget said: ‘I know that Northumbria Police will do all they can to minimise the impact of the government’s cuts.

‘However, a recruitment freeze and the uncertainty about the future of PCSOs will inevitably lead to a reduction in frontline policing.

‘It is astonishing that the government can claim that 20% cuts won’t have an effect in our communities.’