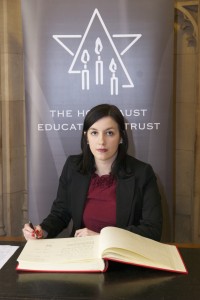 Houghton and Sunderland South MP, Bridget Phillipson pledged her commitment to Holocaust Memorial Day by signing a Book of Commitment in the House of Commons to honour those who perished in the Holocaust.

The 27th January marks the 66th anniversary of the liberation of the Nazi concentration and extermination camp, Auschwitz-Birkenau.

The Holocaust Educational Trust placed a Book of Commitment in the House of Commons to give MPs, like Bridget, the opportunity to remember those who were persecuted and murdered during the Holocaust -; and to support the sharing and safeguarding of ‘Untold Stories’, learning from survivors’ experiences to help create a future free from hatred and prejudice.

After signing the Book of Commitment, Bridget said:

“In the tenth year of its commemoration in the UK, Holocaust Memorial Day 2011 marks the anniversary of the liberation of Auschwitz-Birkenau. As antisemitism, racism and prejudice are still present in our society, learning from the extraordinary ‘Untold Stories’ of those who survived gives us the opportunity to reflect on the evil that was perpetrated during the Holocaust and other genocides and pledge to create a brighter future.”

“We are delighted that Bridget is supporting Holocaust Memorial Day. As the number of survivors dwindles, remembering the Holocaust and passing on their testimony is more crucial than ever. Reflecting on ‘Untold Stories’ helps give back voices to those who were persecuted and reinforces the contemporary lessons that can be learnt from this dark period in our history.”