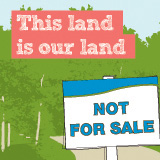 Labour MP for Houghton and Sunderland South, Bridget Phillipson has called the Tory-led government’s plan to sell off our forests a ‘reminder of what Tory governments do’.

The Tory-led government wants to sell The Forestry Commission’s estate covering 18% of England’s wooded areas; consisting of over 1,000 woods, 250,000 hectares of land with around 250 million trees.

Bridget and Labour colleagues are leading the fight against the Tory-led government’s plans. This week, Labour tabled a motion to protect our forests, Bridget and 259 parliamentary colleagues voted in support of the motion.

Commenting after the vote, Bridget said:

“These forests are our forests. David Cameron claimed his party had changed… he said last year ‘vote blue go green’. What happened instead is the Tories went back to the 1980s and started cutting.

“I receive dozen’s of emails every day from concerned residents angered by the Tory-;led governments plans to sell off our forests. This is a reminder of what Tory governments do.

“My Labour colleagues and I will continue to fight against these plans in Parliament, and work alongside the many community campaigns fighting against these dangerous proposals.”