Bridget calls for VAT rise on fuel to be reversed 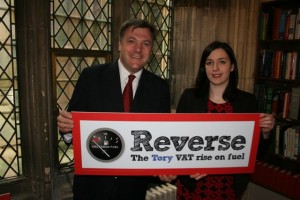 Bridget Phillipson, Labour MP for Houghton and Sunderland South is calling on the Chancellor George Osborne to reverse the government’s VAT rise on fuel.

The hike in VAT to 20 per cent in January has added nearly 3p to the price of a litre of petrol and will raise £700m for the Treasury, according to figures from the independent House of Commons Library.

The Labour Party says the VAT rise should be reversed immediately on petrol using the £800m extra the government is now getting from the bank levy, compared to what it was expecting in the last Budget.

Bridget said:“Families in our area are already bearing the brunt of the £39 million cut to Sunderland City Council. This VAT rise on fuel will make things worse.

“It’s time that Chancellor George Osborne started living in the real world and took immediate action and reverses the VAT rise on fuel, which has added nearly 3p to the price of a litre on petrol.

“Even hard working families who use public transport could be hit if bus companies recoup the cost of the rise though increased fares. I have launched a petition calling on George Osborne and the rest of the Tory-led Government to re-think this VAT rise which will hit hard working families up and down the country.”

The table below shows the average price in pence of a litre of unleaded petrol (95 octane) in each region and nation of the UK, according to the AA fuel price reports for February 2011 and December 2010.