Bridget says carers should get the support they deserve 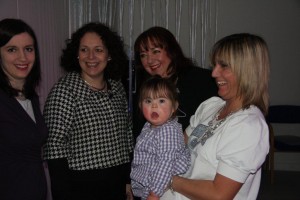 Houghton and Sunderland South MP Bridget Phillipson has called the government’s commitment to the voluntary sector into question after a report published by carersweek.org showed that more than “80 % of unpaid carers are worried about cuts to services”.

The study, published to coincide with carer’s week, highlights the concerns of some of Britain’s 6 million careers that, according to carersweek.org, save the UK economy £119 billion each year by “relieving pressure on health and social services”.

Bridget, pictured with fellow Sunderland MPs Julie Elliott and Sharon Hodgson, also recently met with parent carers at a celebration of their work and the work of Sunderland Parent Carers Centre.

Commenting on the release of the study, Bridget said:

“In the same week that hundreds of Parliamentarians, celebrities and activists have spoken out in support of carers we hear that the cuts by the Tory-led government could severely impact the services they rely on.

“In my constituency, we have a higher than average number of carers and I know from listening to local people that carers may not be getting all the help they are entitled to.

“If David Cameron, and the rest of his Tory-led government really want to promote a big society -; they should start by supporting the work of the voluntary sector such as that done by carers in my constituency.”

To read more about the study or for more information about the work of carers, clickhere.