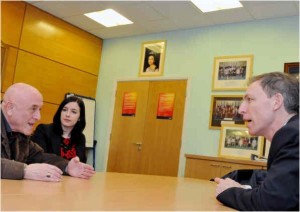 Armed Forces Day this Saturday gives us all a chance to stand up and pay tribute to our Armed Forces, past and present.

“Our Armed Forces are world-class and deserve the support and recognition of the whole country.

“In Afghanistan and elsewhere our Forces put their lives on the line to protect our national security. They protect our interests and stand up for our values. We all owe them a huge debt of gratitude and I particularly want to recognise the sacrifices and achievements made by the Armed Forces based here in Sunderland.”

“I am pleased to see that across the country people are getting involved in Armed Forces day celebrations, which I am proud Labour introduced three years ago. It is hugely important that we take this chance to thank our Forces, who contribute so much to our country, and their families, who offer them such huge support.

“They are each a tribute to our nation, the very best of Britain, who deserve not just the highest levels of respect, but the greatest possible support and care. That is why I am glad the Government has finally been persuaded to enshrine the Military Covenant in Law following sustained pressure from the Royal British Legion, charities and the Labour Party. This should give increased protection for service personnel and their families and strengthen the bond between the nation and the Services.”