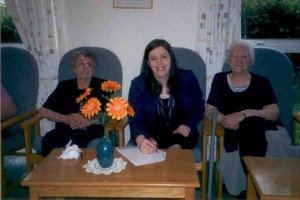 Older people are fast becoming one of the largest groups in the United Kingdom, but despite making up 40% of voters, there is no Government minister dedicated to the well-being of older people. A nationwide petition and Early Day Motion in Parliament are calling for a centralised Government portfolio that prioritises the needs of older people and ensures that their views and interests receive dedicated attention.

“Older people already make up 25 per cent of the population and life expectancy is only set to increase as people live happily into older age. I want to ensure that older people living in Houghton & Sunderland South are represented at the highest political level and enjoy dignity and respect in their later years and I have come to visit the residents of St Aldates to listen to their views and concerns.”

The petition (available at www.greypride.org.uk) is being led by Anchor, England’s largest not-for-profit provider of care and housing, representing 42,000 older people and responsible for several services on Wearside.

Grey Pride is supported by celebrities including Angela Rippon, who said: “The collective experience and wisdom of Britain’s older generation brings enormous value to our society, and it is high time that people of all ages appreciate the role over-60s can play in our workplaces, communities and families. I join Anchor in calling on our Government to create a dedicated Minister for Older People to give all people in their Golden Age a champion at the highest level.”

Jane Ashcroft, Chief Executive of Anchor, added: “Within the Government’s equality agenda there is a dedicated minister for women, the disabled and children, but none for older people, who represent nearly 25% of the population. Anchor’s Grey Pride campaign will redress the balance, reclaim growing old as a positive experience and break down the barriers preventing older people leading happy, fulfilling lives.”