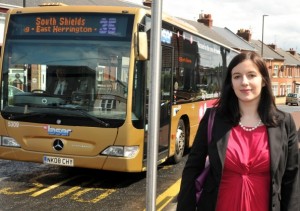 Houghton and Sunderland South MP, Bridget Phillipson has said deregulation has failed to deliver the level of service local people deserve, after a report from the Competition Commission slams bus companies for the lack of “head-to-head” competition.

The report from the Competition Commission (CC) published today sets out comprehensive measures to ensure that passengers benefit from greater competition, echoing the concerns Wearsiders expressed in the ‘Big Bus Survey’.

During the summer, over 1000 local people took part in Bridget’s ‘Big Bus Survey’. The final report clearly shows how frustrated Wearsiders are with the level and quality of bus services. Many residents have made it clear that the current system of service provision does not fulfil their reasonable expectations of frequent service, stable and easy to understand fares, and direct routes to local services such as hospitals. A copy of the report can be downloaded here.

The House of Commons Transport Select Committee has also heard from residents through a special edition of the ‘Big Bus Survey’. A copy can be downloaded here.

Commenting on the report by the Competition Commission, Bridget said:

“Deregulation has failed to deliver the level of service people across Wearside deserve. Twenty five years after bus services in the UK were deregulated the Competition Commission has had to step in and recommend to the government changes to further open up the market.

“The Competition Commission clearly sees the status quo cannot continue. While they are in favour of introducing new rules, I believe the existing legislation and mechanisms should be enforced.