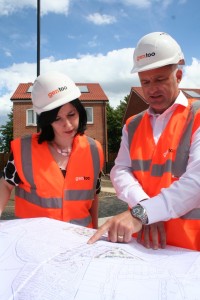 The UK continues to suffer from an increasingly desperate housing crisis which is threatening to force a generation into insecure rental agreements. Although the high population density in London and the South East means pressure for housing is particularly acute in those areas, this is undoubtedly a nationwide issue. The North East is not exempt and this crisis represents an unprecedented challenge for the region.

The limited availability of social housing is one of the most obvious symptoms of this problem. There is a huge demand for social housing stock from families in the region who want security of tenure, affordable rents and guarantees that repairs will be carriedout quickly and efficiently. As the demand for social housing cannot be met by the current supply, many are being forcedto look for alternative rental agreements in the private sector. However, many vulnerable families are being exposedto agreements that do not provide security of tenure. It can also be extremely difficult to uproot children and move them away from their schools and support networks if the landlord suddenly decides to sell up or increase the rent.

These problems can befurther exacerbated by the minority oflandlords who do not act responsibly and exploit their tenants with excessive fees or by not carrying out repair work. Labour believes that there should be greater protection for tenants and a clampdown on rogue landlords, which is why we are looking at how to promote security of tenure and sustainable rents in the private rented sector. The number of families using this kind of accommodation has massively increased since the financial crisis and they need our help.

Home ownership is deeply rooted in the British psyche and remains the tenure of choice. Unfortunately this is increasingly no longer an option for many. Deposits required by lenders have become prohibitively high as they restrict mortgage lending. In a recent study by the Joseph RowntreeFoundation, it was reportedthat the number of homeowners under the age of 30 will fall from 2.4 million to 1.3 million over the next 8 years, a drop of 46%. In addition, more than 1 million young people will be locked out of home ownership and 400,000 vulnerable young people could be completely excluded, unable to afford either to rent or buy their own home. Although no one wants to see a return to the pre-crash days of unaffordable mortgages, things have now swung too far in the other direction.

At this year’s Annual Labour Party Conference I spoke at a fringe event on home ownership sponsored by Gentoo, a not-for-profit company that provides housing services in Sunderland. They have launched a new initiative called Genie that allows customers to enter a long-term structured payment plan and acquire an increasing share in their home by making one residency fee payment each month. There are no deposit requirements and there is less exposure to the risk of house price movements because the customer gradually builds up a share in their property. It is a great response to the current problem, offering people a new and innovative way to get on the housing market.

But the most crucial cause of this housing crisis is the limited supply of affordable homes. When Labour was in government the Kickstart investment scheme brought home building forward during times of recession. This measure was directly beneficial to my constituency, helping to keep construction workers in employment, stopping small businesses going to the wall and most importantly stimulating the economy back into growth.

That’s why I’m delighted that this week Ed Balls unveiled plans to use a £3bn windfall from the sale of the 4G mobile phone spectrum to build 100,000 affordable homes. It will not only help get the economy moving again but will go a long way to help ease the housing crisis that is having such a detrimentaleffect on both the North East and the country as a whole. I have spoken out before on the need for the government to do more to create jobs and growth. Now it seems they have totally run out of ideas it is up to Labour to come up with concrete policies that are going to get this country back on its feet and people back into their homes.