Bridget takes action to support women and girls against violence 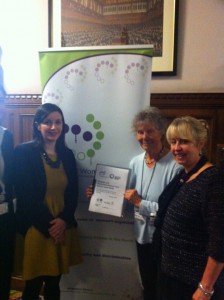 Houghton and Sunderland South MP, Bridget Phillipson has spoken out in support of a number of women’s organisations from the north east who lobbied MPs in Parliament.

Organisations from across the north east descended upon Parliament as part of a national campaign for an end to violence against women and girls. Campaigners are also seeking improved representation of women across society and are promoting equality in the workplace.

Campaigners from the North East Women’s Network took the opportunity to showcase their latest report The impact of austerity measures upon women in the North East (pictured). A copy can be downloaded here.

Speaking after the lobby, Bridget said:

“The current economic plan followed by the Conservative-led government is disproportionately affecting women in the north east and damaging key support systems for families during this time of need.

“Hundreds of women from across the country have come to Westminster to bring to the government’s attention the harm that is being done through disproportionate cuts.

“Through my role on the All Party Group for Sexual and Domestic Violence and the Home Affairs Select Committee I will continue to press the government on these vital areas.”