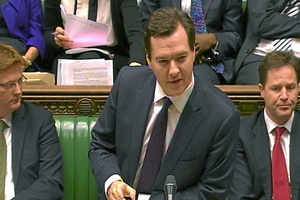 We found out the true scale of the government’s failed economic plans when Chancellor George Osborne presented his Autumn Statement to Parliament.

Rather than securing our recovery, the economy is set to shrink again this year.

Growth forecasts have been downgraded this year, next year and every year to 2016. As a result of his failure on jobs and growth, the Chancellor was forced to admit that the government will not be able to meet its own target of balancing the books and getting the debt down by 2015.

In fact, the government will need to borrow £212 billion more than he planned two years ago. High levels of unemployment mean the welfare bill is rising and tax returns are down due to slow growth.

The Chancellor is trying to make out that further welfare cuts target people he claims can’t be bothered to work. He talked about the people who have their blinds shut on a morning as everyone else goes out to work. But independent research shows that the majority of people who will be hit by his cuts to tax credits and benefits are actually in work – trying to do the right thing.

It’s also a tough climate for those who are seeking work with too few jobs available. Rather than blaming job seekers for their plight, the government should do more to help them back into work.

The government’s flagship Work Programme has so far failed to deliver. The Chancellor is clobbering low and middle income families to fund a £3billion giveaway to the richest in our society. What kind of government says that you make low-paid people work harder by making them poorer and cutting their tax credits but that millionaires will only work harder if you give them a tax cut?

No wonder the Chancellor couldn’t help but smirk as he claimed that ‘we’re all in this together’.