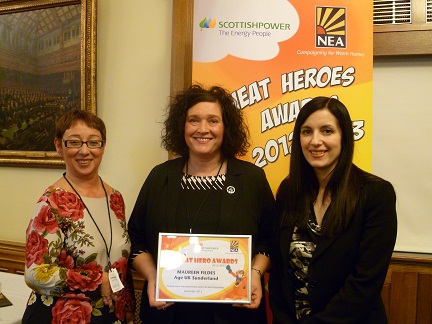 Houghton and Sunderland South MP, Bridget Phillipson has praised the work of a local charity worker who has received an award for going above and beyond the call of duty tackling fuel poverty.

As part of their Heat Heroes Award Scheme,Maureen Fildesreceived an award from the National Energy Action (NEA) for helping to tackle fuel poverty in parts of Sunderland. In her role she has visited over 500 people in their homes, helped them with over £34,000 worth of grants, and distributed over 100 emergency winter packs at times of extreme cold weather. Thanks to Maureen, local residents have not just benefited from having their homes heated but have experienced greater emotional and physical well-being.

The NEA is a charity working to reducefuel poverty in the UK. Fuel poverty affectsover five million UK households and is a growing problem as living costs and energy prices continue to rise. The Heat Heroes Award Scheme aims to recognise individualswho have made a significant contribution to helping people living in fuel poverty in their local community, either at work or in volunteer activities outside the workplace.

“It was a pleasure to attend NEA’s Heat Heroes Award reception and find out more about how people across the country are devoting their own time to reduce fuel poverty in their communities.

“I would especially like to congratulate Maureen Fildesfor her work in my constituency and across Wearside. Maureen has made a very important contribution to tackling the growing problem of fuel poverty in our local area and I want to thank her for all her hard work to help local people.

“As the cost of energy continues to rise, I fear that more and more people will face fuel poverty this winter. We are already experiencing extremely cold conditions and a harsh winter could prove disastrous for many families.”