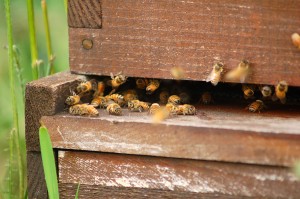 Houghton and Sunderland South MP, Bridget Phillipson has united with Wearside Friends of the Earth (FOE) to highlight the plight of Britain’s bee population.

Bees play a pivotal role in the pollination of British crops -; without them the UK would have to pay at least £1.8billion every year to hand-pollinate crops.

Wearside FOE is calling for the government to implement a Bee Action Plan to deal with the dramatic decline in honey and wild bee populations.

Since the loss of natural habitat is one of several causes of the bee decline they are also calling on people to make their gardens, streets and communities bee-friendly.

David Robert Hann, of Wearside FOE, said: “Without bees our food prices would rise and the quality of our produce will fall.

“Many of the plants and wildlife in our parks, gardens and countryside depend on bees too.”

Speaking after the event, Bridget said: “I am happy to call for a stakeholder group to be convened to draw up a plan in line with scientific evidence, which ensures the way we farm our food and plan our towns and cities is good for bees and other pollinators.”