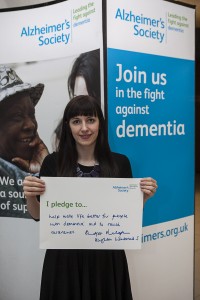 Houghton and Sunderland MP, Bridget Phillipson has pledged to take action to support the 800,000 people living with dementia across the UK.

Bridget joined other MPs and representatives from Alzheimer’s Society in Parliament to pledge her support in a handwritten statement of action to support people with dementia and their careers.

The Sunderland MP has pledged to raise awareness of dementia and highlight the increasing number of diagnoses in across the Sunderland area.

According to NHS statistics, there are currently 3,339 people living with dementia in Sunderland and this is expected to increase to 3,551 by 2014.

“Dementia can be a devastating condition. It is important that we take steps to make sure that people with dementia are able to live well within their own communities.

“That means we need to improve our understanding of dementia so that we can collectively tackle the stigma that has traditionally been associated with the condition and can leave constituents and their carers feeling socially isolated.

“Greater awareness will also mean that people who have dementia receive a timely diagnosis so they can get the help they need and deserve.”

Alzheimer’s Society campaigners were in Westminster to drum up political support for their newly developed Dementia Friends initiative.

Launched in February this year, Dementia Friends aims to help people understand what it might be like to live with dementia and turn that understanding into action.

Alzheimer’s Society is aiming to have one million Dementia Friends by 2015, to help make England more dementia-friendly and improve the lives of the 650,000 people currently living with the condition.

During the afternoon, 30 MPs from across England took part in a Dementia Friends session.

“Most people don’t know enough about dementia. Dementia Friends is the perfect opportunity to be able to invite everyone to improve their knowledge.

“We are pleased to have been able to engage over 130 MPs in one day. They have a huge influence in their local communities and we hope they will use this opportunity to take action and improve lives.”