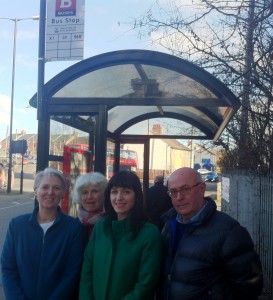 Houghton and Sunderland South MP, Bridget Phillipson has met with members of the Tyne and Wear Transport Users Group as part of her campaign to improve local bus services.

The Tyne and Wear Transport Users Group (TWTUG) was formed in November 2010 and is a voluntary group with a mission to establish a transport system that is affordable, accessible and attractive to the local community.

Bridget has been campaigning for over three years for a affordable, accessible and better transport network for local people based on a London-style system of bus regulation.

“Public transport has a big role to play in easing the current cost of living crisis in our community. A high quality, affordable and accessible transport system is vital for our local economy.

“For over three years I’ve been campaigning for a London-style system of bus regulation in Tyne and Wear. Such a system could see great improvement for many in our community and cheaper fares for the majority of bus users. I’m delighted that Tyne and Wear Transport Users Group also see the benefits of this change.”