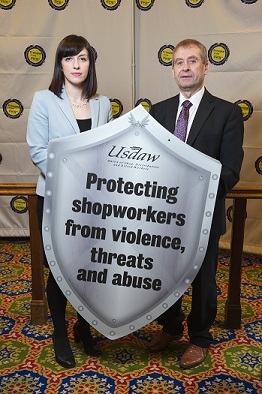 Member of Parliament for Houghton and Sunderland South, Bridget Phillipson, has attended the ‘Respect for Shopworkers Week’ event at the House of Commons to lend her support to shopworkers who are assaulted at work.

The event was held as part of a wider ‘Freedom From Fear’ campaign by the Union for Shop, Distributive and Allied Workers (Usdaw), which aims to prevent violence, threats and abuse against shopworkers.

‘Respect for Shopworkers Week,’ which runs from 10-14 November, highlights these important issues and called for politicians to recognise the need for there to be a change in the law to give shopworkers better protection from assault.

Usdaw is campaigning for a new law that would create a specific offense relating to assault on people who come into face-to-face contact with members of the public when carrying out their job.

“Respect for Shopworkers Week is an important part of Usdaw’s campaign to raise awareness of the abuse that shopworkers have to deal with on a regular basis.

On four separate occasions this year Labour MPs and Peers have supported Usdaw’s plans to introduce new legislation to give shopworkers the legal protection they need. Unfortunately the government blocked every one of these proposals.

It is crucial that the government understands the extent of the problem: more than 300 shopworkers are assaulted every day simply for doing their jobs.

It is clear that the government needs to do more to protect shopworkers. Abuse should not be part of their job.”