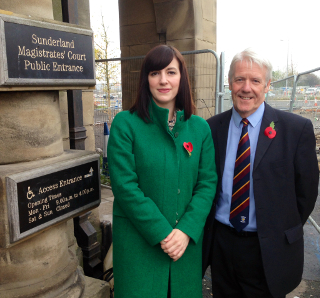 Houghton and Sunderland South MP, Bridget Phillipson has continued to campaign for the government to reverse its decision to put on hold the rebuilding of Sunderland’s Centre for Justice.

Bridget, who together with her colleague Julie Elliott MP, has campaigned for a new court visited staff and magistrates recently and spoke in depth with Cliff Jones, Chairman of the City of Sunderland Bench about the needs of victims magistrates and the state of the current building.

At Justice Questions the campaigning MP further pressed the case for a new court and uncovered that the Department for Justice is paralysed by inaction despite continual promises.

Bridget Phillipson (Houghton and Sunderland South) (Lab): What recent progress he has made on his courts reform programme. [905985]

The Parliamentary Under-Secretary of State for Justice (Mr Shailesh Vara): Since the Secretary of State’s written ministerial statement on 28 March this year, the programme team has been developing the detailed plans required to deliver the programme over the next five years, as well as working to identify the areas where we can make early progress.

Bridget Phillipson: I have lost count of the number of times I have raised with the Minister and his predecessors the wholly inadequate state of Sunderland’s court buildings and the need for a decision. Plans to rebuild the court complex have been on hold since 2010. Will the Minister now acknowledge to staff, to magistrates and to victims that they should not expect a decision this side of the election?

Mr Vara: The hon. Lady is aware that I had a meeting with her, along with her colleague, the hon. Member for Sunderland Central (Julie Elliott), and she has corresponded with me. She talks about having said the same thing over and over again. I have to say to her, over and over again, that there is a courts reform programme and the proposals for the Farringdon road site that she mentions are part of the mix. As we speak, no firm decision has been taken.

“I’ve been campaigning for the court in Sunderland to be rebuilt ever since operations were closed at Houghton.

“When I visited the court, I also met with staff who are doing their best in the current building. I know that there are concerns around the accessibility of the current court and that it doesn’t meet the needs of victims. I know from speaking to local magistrates how keen they are that the rebuilding goes ahead.

“The current court has served its time for over 100 years and now we need a new centre for justice. A new court would make a massive difference to the area, support regeneration and provide jobs for local people.”