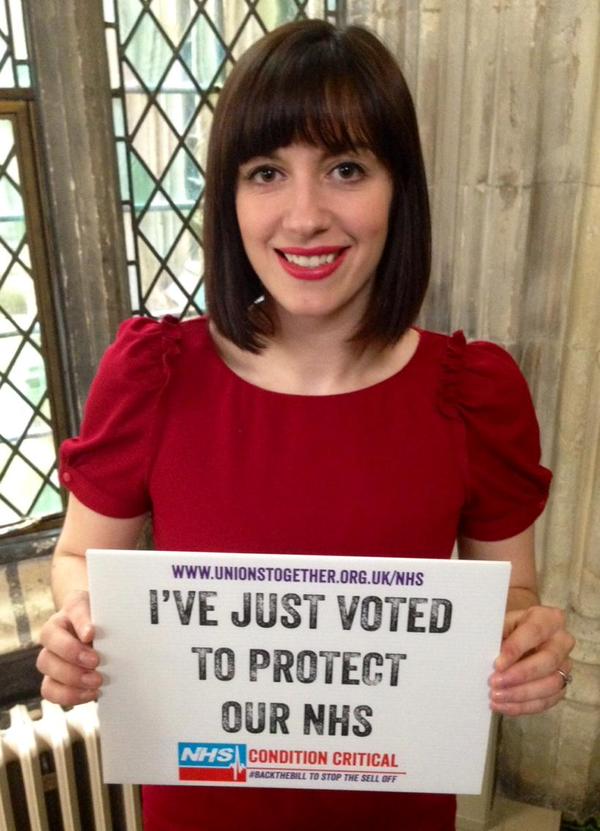 Bridget Phillipson, Member of Parliament for Houghton and Sunderland South, has voted in Parliament for a Labour Bill that seeks to repeal NHS competition rules introduced by the Conservative-led coalition’s Health and Social Care Act 2012.

The proposed Private Member’s Bill, sponsored by Labour MP Clive Efford, aims to remove the health service commissioners’ obligation to put services out to tender, and create a framework for NHS contracts that will put the interests of patients before competition.

Not a single senior government minister came to debate the Bill’s Second Reading in Parliament on 21 November. By not bothering to turn up, the government showed how little it cares about the future of the NHS. 239 MPs voted in favour of the Bill.

Bridget has also recently surveyed constituents in Houghton and Sunderland South to find out how local people feel about NHS services in their area.

Bridget’s survey, entitled ‘Shaping our NHS for the next 66 years,’ asked constituents to share experiences of care received at NHS hospitals in Sunderland and across the region, as well as local GP practices.

The results were largely positive, with 69% rating their overall experience of the care they received in the last two years as ‘excellent’.

However, some concerns were raised in relation to staffing, standards of cleanliness and long waiting times for GP appointments.

Bridget has now forwarded the survey to the Care Quality Commission for analysis.

Speaking after the vote on Labour’s Bill, Bridget Phillipson said:

“The NHS this year celebrated its 66th birthday. Since its creation, the NHS has overcome tremendous challenges to become a world-class health service, free at the point of use.

If the NHS is to continue to flourish, it is important that its resources are used in the most efficient way.

That is why I surveyed my constituents and forwarded their responses to the Care Quality Commission.

The Conservative-led coalition’s Health and Social Care Bill has put the NHS at risk.

The government’s approach is to let private companies cherry-pick the most profitable NHS services, regardless of patient need, and spend more money on economic regulators and competition lawyers.

I voted for Clive Efford’s Bill in Parliament because it will end the creep towards NHS privatisation, bureaucracy and red-tape, and put patients back at the heart of the NHS.

If Labour wins next year’s General Election, a future Labour government will introduce a £2.5 billion ‘Time to Care’ package to fund new staff, including 20,000 more nurses.

Only Labour will ensure that the NHS once again puts patients before profits.”