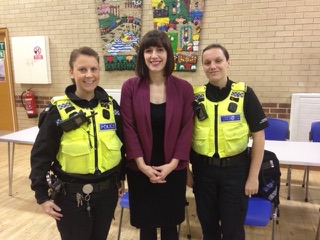 Member of Parliament for Houghton and Sunderland South Bridget Phillipson has held the sixth in her series of constituency coffee mornings to discuss anti-social behaviour and local policing.

The well-attended event was held on Saturday 22 November at Thorney Close Action and Enterprise Centre in Sandhill ward.

The officers reported that crime and anti-social behaviour in the area had decreased in recent months thanks to increased reporting and the ability of police to target resources in problem areas.

People were advised not to leave any valuables on display in cars and to use timers for lights at home during the darker winter months.

Residents were also keen to discuss the issue of speeding and parking in the local area.

The police gave assurances that they are working to tackle speeding locally and appreciate assistance with identifying problem areas. Bridget is also running a campaign to make local roads safer.

Speaking after the coffee morning had concluded, Bridget said:

“It was great to see so many people come along to my coffee morning once again.

“Anti-social behaviour can make peoples’ lives very difficult and policing is an issue that everyone cares about, so I was glad that local residents had an opportunity to discuss their views.

“I would like to thank the two officers who gave up their time to come along and engage with the local community. It is so important that residents and the police work together to help combat anti-social behaviour.

“I was also pleased the officers made it clear that tackling neighbourhood crime is a top priority, and that reporting it helps the police to identify issues and focus resources.

“Residents should be aware that they can report anti-social behaviour in confidence by calling 101, and that this will never be considered a waste of police time.

“I hope more constituents will come along to my final coffee morning on 6 February.”

The next coffee morning in the series will be held on 6 February in Copt Hill ward. Bridget and a member of the local community policing team will again be present to hear residents’ views.

If you would like to attend the next event, please email Bridget through the ‘Contact Bridget’ page of this website, or ring the constituency office on 0191 385 7994.

Information about local policing teams and crime figures is available online at www.police.uk.