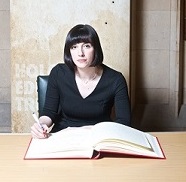 Ahead of Holocaust Memorial Day on Tuesday 27 January 2015 Member of Parliament for Houghton and Sunderland South Bridget Phillipson has signed the Holocaust Educational Trust’s Book of Commitment in the House of Commons.

By signing the book Bridget committed to remembering the Holocaust and to working towards a future in which prejudice and hatred are never again allowed to gain a foothold in society.

The 2015 Holocaust Memorial Day theme is memory, a particularly pertinent choice because this year marks the 70th anniversary of of the liberation of Auschwitz-Birkenau and also the 20th anniversary of the Genocide in Srebrenica, Bosnia.

The purpose of Holocaust Memorial Day is to commemorate the Holocaust, Nazi Persecution and subsequent genocides. Those who have no direct experience to recall are asked to ‘remember’ those who were murdered and to honour the survivors.

Speaking after the singing, Bridget said:

“It was an honour to be given the opportunity to sign the Holocaust Educational Trust’s Book of Commitment for a fifth time.

“Signing the book each year is about the importance of remembering all the victims of the Holocaust and subsequent genocides.

“It is now seventy years since the liberation of Auschwitz-Birkenau and with each passing year fewer and fewer survivors of the Holocaust are able to recount their experiences.

“It is imperative that these experiences are remembered and that future generations understand the causes of the Holocaust and reflect upon its consequences. That is why this year’s ‘Keep the memory alive’ theme for Holocaust Memorial Day is so appropriate.

“I encourage everyone to go along to one of the thousands of commemorative events before, during and after Holocaust Memorial Day that are being arranged by schools, faith groups and community organisations across the country.

“Over the last year there have been some deeply disturbing reports of genocide taking place in countries like Syria and Iraq.

“It is clear that genocide, antisemitism, racism, xenophobia and discrimination still continue to this day.

“We all have a shared responsibility to fight these evils.”

“We are proud that Bridget Phillipson MP is supporting Holocaust Memorial Day.

“As we mark the 70th anniversary of the end of the Holocaust and the liberation of the concentration camps in 2015, it is vitally important that we both continue to remember and learn from the appalling events of the Holocaust -; as well as ensuring that we continue to challenge antisemitism and all forms of bigotry.”