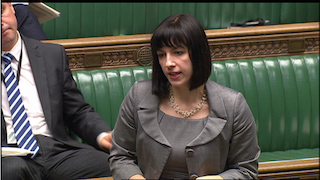 Member of Parliament for Houghton and Sunderland South Bridget Phillipson has used a parliamentary question to ask the Secretary of State for Transport Patrick McLoughlin why his Department refuses to support a Quality Contract scheme for buses in Tyne and Wear, even though the government backs similar plans for Greater Manchester.

For the last four years Bridget has campaigned for an affordable, transparent and accountable bus network for the north east through the introduction of a Quality Contract scheme.

Last October, the North East Combined Authority voted in favour of the scheme for Tyne and Wear. The proposals are now being assessed by the independent Quality Contract Scheme Board. If implemented, this will lead to the establishment the UK’s first regulated transport system outside of London since 1986.

The following month the government announced plans to devolve transport powers in Manchester to a directly elected city-wide mayor. The major will have responsibility for a devolved and consolidated transport budget, for franchised bus services (subject to consultation by Greater Manchester), and for integrated smart ticketing across all local modes of transport.

Although the government is wholeheartedly in favour of these new powers for Manchester, it has consistently refused to lend its support to similar plans in the north east. Bridget’s question at Transport Questions last week gave the Transport Secretary the opportunity to rectify that.

But the Transport Secretary’s answer failed to address this and did not even mention the plans for Tyne and Wear.

“I have repeatedly asked the Transport Secretary to support proposals to introduce a Quality Contract scheme for north east bus services andI cannot understand why he refuses to do so.

“These proposals are very similar to those planned for Greater Manchester. The Transport Secretary is very keento back the devolution of transport powers to Manchester, yet he remains silent on the north east.

“His answer to my question last week did not even attempt to address quality contracts.

“It’s time the Transport Secretary stopped dodging the question and explained to my constituents and people across the north east why something that is good enough for Manchester is not good enough for Tyne and Wear.”