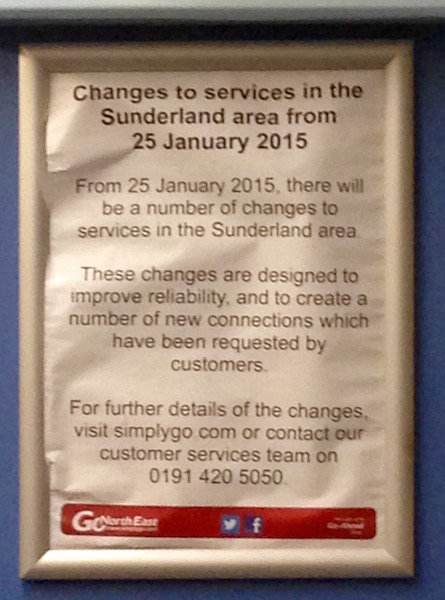 In an article featured in the Evening Chronicle, Member of Parliament for Houghton and Sunderland South Bridget Phillipson has criticised bus operator Go North East for imposingcuts to bus services across Tyne and Wear.

The total impact of these changes has been estimated by Passenger Transport ExecutiveNexus to be a loss of over 80 journeys per day.

Sunderland has been particularly affected. On 13 January Go North East announced changes to routes and timetables in the city that would be implemented from 25 January.

Many constituents in Houghton and Sunderland South have contacted Bridget to raise concerns about alterations to the 35, 35A, 35B and 35C services, which provide vital access to local schools and health facilities.

These four services have now been reduced to three (35, 35A and 36) running along significantly altered routes. It is difficult to compare the new route map and timetable information with previous versions, making it hard for passengers to understand exactly what has changed.

Local people have voiced strong concerns that the re-routing of the 35 services will significantly disrupt journeys to nearby GP practices in Silksworth, Herrington and Sunderland Royal Hospital. Others are worried that local children will have much longer journeys to schools such as the Venerable Bede Academy becausethey will have to change buses.

According to the Driver and Vehicle Standards Agency, eleven variations to routes 35, 35A, 35B and 35C have been registered since their introduction in 2011. Go North East have stated that this week’s changes are designed to simplify services for customers. But four variations have already been made to routes 35, 35A and 36 since they were first registered last November.

“The volume of service changes implemented by Go North East this week is likely to cause a great deal of confusion and inconvenience to many people.

“I have received many emails and phone calls from worried constituents expressing their concerns over changes to the route 35 service.

“Go North East say this is about simplifying things, but there have been 15 variations in this route since 2011 and I cannot see how this constant chopping and changing is making things simpler. The new route maps and timetables are also presented differently from older versions.

“People are understandably angry about the fact that four services have been reduced to three. Across the region estimates show that as many as 80 routes a day will be cut.

“Go NorthEastshould explain why these changes are being implemented and how they are in the best interest of passengers.

“This salami slicing of services shows exactly why we must introduce a London-style bus network with stable routes, oyster style ticketing and fines for operators when they fail to live up to their promises.

“That is why since 2010 I’ve been campaigning for change. The introduction of a Quality Contract Scheme will ensure that the needs of passengers are prioritized when decisions are made about changes to services.”

Bridget sent a letter on 20 January 2015 to Go North East Managing Director Kevin Carr to inform him of widespread local concerns about the changes. In a reply dated 23 January, he denied that they would affect access to hospitals and schools and claimed that they were being introduced for the benefit of customers.

The article can be accessed here: http://www.chroniclelive.co.uk/news/north-east-news/go-north-east-bus-company-8549790