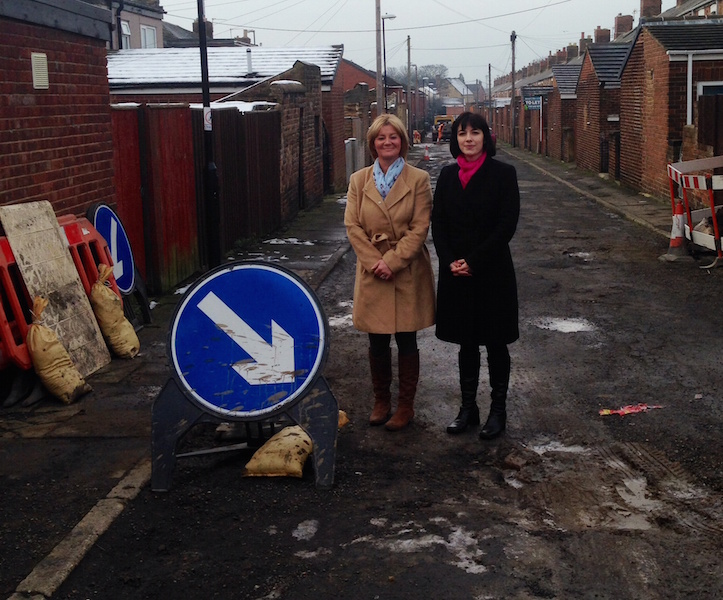 On 31 January Member of Parliament for Houghton and Sunderland South Bridget Phillipson visited Fairy Street and Edward Street to oversee the beginning of work that will transform the surrounding area.

Following efforts by the MP and local residents, Sunderland City Council last September agreed to spend £939,000 to bring the run-down Fairy Street, Caroline Street and Edward Street up to scratch.

These streets, which have been neglected for decades, have become hot-spots for crime, anti-social behaviour and urban decay.

The money has been allocated as follows:

£300,000 on resurfacing Fairy Street
£589,000 on buying and refurbishing a number of empty and privately-rented properties on all three streets.
£50,000 to draw up empty-dwelling management orders so this can happen.

“I have been in regular contact with the City Council and have been pressing them to take action on the state of Fairy Street and Edward Street.”

“Local residents had expressed their concerns to me about the high number of empty properties, the crumbling road surface and anti-social behaviour issues.

“The City Council subsequently agreed to have a formal consultation on the situation and I am pleased to say that it was agreed to implement a package of measures totalling over £900,000 to improve conditions.

“I’ve come to Fairy Street this morning to see the start of the work which I hope will see a great improvement in the living conditions of my constituents in the area.”