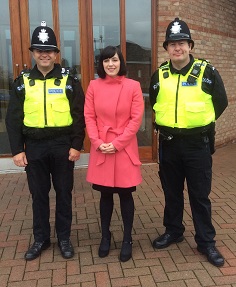 On 6 February Bridget Phillipson, Member of Parliament for Houghton and Sunderland South, held the seventh and final of her successful constituency-wide coffee mornings on anti-social behaviour and local policing.

Bridget’s coffee morning series has helped improve engagement between residents, local policing teams, councillors and community groups on anti-social behaviour. Over the last two years she has written to over 14,000 households and spoken directly to hundreds of local residents about their concerns regarding this issue. During this period the number of reported incidences of anti-social behaviour in the Houghton policing area fell by over 30%.

Guest speakers at the coffee mornings have included Vera Baird, Police and Crime Commissioner for Northumbria Police and Inspector Lisa Musgrove of the Houghton Neighbourhood Policing Team. A member of the local policing team for the area surrounding the event venue also attended each event to inform residents about what was being done in their area to tackle this problem.

On 6 February, over 40 local residents attended the final coffee morning in this series to be held before the forthcoming General Election at the Bethany Christian Centre on Hetton Road, Houghton-le-Spring. Many were interested to hear from guest speakers Sergeant Andy Taylor and PC Shane Jenness of Northumbria Police, who explained to local residents that crime around Easington Lane and Hetton was falling as a result of the police working in conjunction with the local council and Gentoo in the area to cut incidences of anti-social behaviour, theft and burglaries.

As at previous events in this popular series, residents were also keen to raise specific concerns with the police officers and Bridget. At the end of a lively and engaging debate it was clear that many in the community desired to work together to reduce anti-social behaviour. A number of local people were sympathetic to the efforts being made by the police and conscious that Northumbria Police is doing its best to maintain front-line policing despite having to absorb disproportionate funding cuts.

Speaking after the event, Bridget said:
“It was wonderful to have such a high turn out once again for one of my coffee mornings on anti-social behaviour and local policing.

“My coffee morning series has proved that anti-social behaviour is something that many people care passionately about. Over the last two years I have spoken directly to hundreds of people about this issue.

“Many discussed their personal experiences of anti-social behaviour and explained how it can really blight their lives.

“It has also become clear that the police are doing their best to prevent crime and anti-social behaviour in our communities despite the disproportionate cuts imposed on their budgets. I know they are doing everything they can to keep us safe.

“Cross-community events such as my coffee mornings can help police officers do their job better by making them aware of where and when anti-social behaviour is taking place. They also help residents how to protect themselves from anti-social behaviour and what to do when they experience it.”