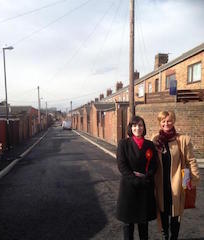 Bridget Phillipson, Labour’s Parliamentary Candidate for Houghton and Sunderland South, called past Fairy Street in Hetton last week to survey the progress of vital repairs brought about by her successful campaign.

As MP during the last Parliament, Bridget and local residents successfully petitioned Sunderland City Council to spend £939,000 to bring the run-down Fairy Street, Caroline Street and Edward Street up to scratch.

While campaigning in the local area Bridget called past Fairy Street with Mary Turton, Labour’s candidate for Copt Hill in the local elections held the same day as the General Election on May 7th.

They observed the improvements that had been made to the street already, including new paving stones, new tarmac and other improvements.

“I am pleased that work has already begun to improve Fairy Street.

“Good progress has already been made on resurfacing the street and it looks vastly improved already.”