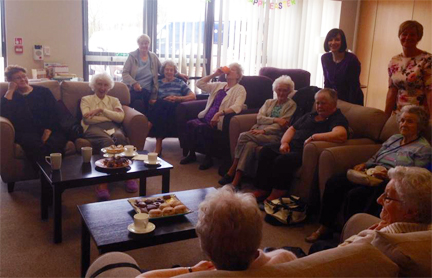 Labour parliamentary candidate for Houghton and Sunderland South Bridget Phillipson has attended a coffee morning with local residents at Cherry Tree Garden scheme in Houghton to discuss local issues ahead of the forthcoming General Election on 7 May.

Following on from her series of successful coffee mornings held across the constituency while an MP during the last Parliament, Bridget and Labour’s council candidate for Copt Hill ward Mary Turton spoke with local people about the issues that matter most to them.

Many raised the need for better local bus services, which is an issue that Bridget has campaigned on for five years. Her Big Bus Campaign is pushing for the introduction of a Quality Contract Scheme for Tyne & Wear bus services that will ensure they are run on a public need basis, not exclusively for profit.

There was also discussion about the difficulty in getting GP appointments when needed. This has become a huge problem for the NHS over the last five years, and if Labour wins in May it will guarantee GP appointments within 48 hours for everyone who needs one.

The new NHS 111 number is also causing concern and confusion. Many residents complained that the advice line was not staffed by medical professionals and that they frequently recommended callers to attend local health services instead of responding to their health queries directly.

Labour has pledged to ensure that after current NHS 111 contracts expire ambulance services will take them on so that, in time, medically qualified professionals could handle all 111 and 999 calls from the same call centres. This will mean more experienced staff on the phones and better classification of calls.

“What was clear is that many are worried about the state of the NHS, especially when it comes to getting the advice and help they need through their GP and the non-emergency 111 helpline.

“It’s unacceptable that so many cannot get to see their GP when they want to and that instead they have to go to A&E, putting further strain on a service that has suffered under the Conservative-led coalition.

“A future Labour government will create a Time to Care Fund -; an extra £2.5 billion a year to train, recruit and fund new staff and to guarantee that everyone can see their GP within 48 hours and get access to vital cancer tests within a week.

“We will reform the failed 111 service by staffing it with trained medical professionals who will give people the advice they need to deal with their condition.

“Only Labour has a plan to save and transform the NHS.”