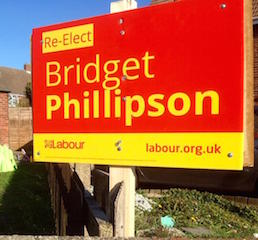 Labour parliamentary candidate for Houghton and Sunderland South Bridget Phillipson has followed up the positive start to her re-election campaign by speaking with countless local residents over the last two weeks.

Bridget and her energetic team of volunteers canvassed potential voters across all wards of the constituency, while Bridget’s first two campaign letters also went out to residents.With less than three weeks till General Election polling day on May 7th many local people were keen to discuss Labour’s plans. Jobs, the NHS and childcare were some of the issues raised by local people, who face a stark choice ahead of the forthcoming General Election between Labour’s plan for a better, fairer Britain and five more years of damaging Conservative policies.

Bridget’s campaign has clearly started to pay off, with Labour garden stakes and posters springing up across the constituency as people show their support for Labour in this crucial election.