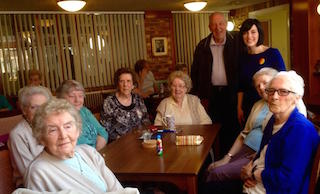 Residents were keen to meet with Bridget to discuss Labour’s plans ahead of the May 7th General Election and to raise issues affecting their lives, such as health and social care, local transport and access to GP services.

With the countdown to polling day reaching its climax and postal votes already sent out, every vote matters in this critical General Election.

After five years of Conservative-led government, many are ready for a change and a more positive vision for the country than the Tories ideological cuts and damaging economic policies.

Only Labour will build a better Britain, with fairer economic policies and protection for the most vulnerable people in society.