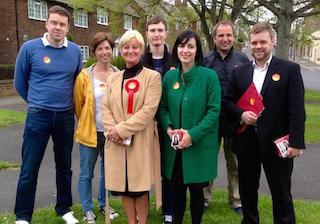 Labour parliamentary candidate for Houghton and Sunderland South Bridget Phillipson has maintained momentum in her campaign for re-election in tomorrow’s General Election.

Come wind, rain or shine Bridget and her team of volunteers have been canvassing regularly across the constituency to speak to voters and help communicate Labour’s plan for a better Britain.

Thanks to their efforts, ‘Vote Labour’ garden stakes and posters can be seen all over Houghton and Sunderland South as many people show their support.

Tomorrow is one of the most important days in a generation, when Britain will decide its future. Britain faces a clear choice between an Labour government that will put working people first or a Tory government that only stands up for a privileged few.