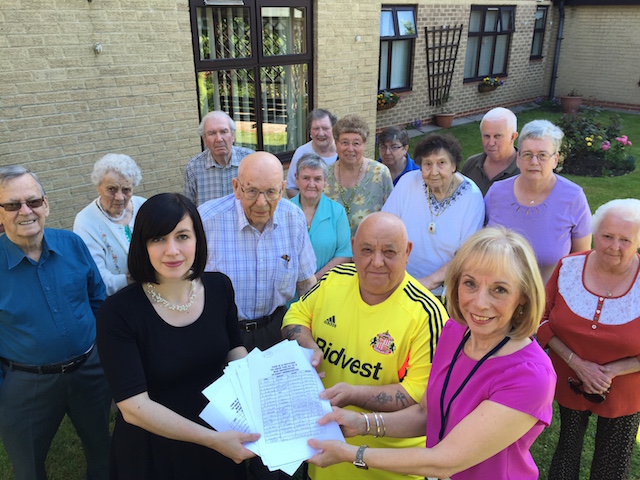 Bridget Phillipson, Labour Member of Parliament for Houghton and Sunderland South, has visited Oakfield Court in East Herrington to receive a petition from local residents to have the No. 35A Bus reinstated in East Herrington, which they have requested her to send to Go North East.

Bridget was invited by Councillor Gillian Galbraith and the residents to visit them again as they continue their fight to see the vital transport link restored. Oakfield Court is a sheltered housing scheme that houses older residents who rely on public transport in order to access their GP surgeries and other local amenities.

It is not the first time Bridget has been to see the residents. During the General Election campaign she also paid them a visit, when many raised concerns over the impact of the cuts to local bus services that have been carried out over the last few years.

Since then residents have decided to take a stand and actively petition bus operator Go North East to reinstate No 35A service. It is the second time in recent years that they have been forced to do so. Back in 2012 they successfully petitioned the operator to maintain the service with some alterations having collected over 300 signatures against proposed changes.

During her tenure as Member of Parliament for the constituency Bridget has campaigned for the introduction of a Quality Contract Scheme to re-regulate the provision of local bus services across Tyne and Wear.

The introduction of this scheme would ensure that bus services are run in the public interest and not exclusively for profit. Routes that are socially important and which provide vital community access will be protected under the plans, which are currently under consideration by the independent Quality Contracts Board.

“It was a privilege to receive the petition by the residents of Oakfield Court today. Having already spoken to them during the General Election campaign, I understand the detrimental effect that bus cuts are having on their access to vital services.

“The loss of the 35A service has made it much more difficult for residents to see their GP and access local amenities.

“We can’t go on like this and that is why I am favour of the re-regulation of bus services. The introduction of a Quality Contract Scheme for the Tyne and Wear bus network is the only way to ensure that bus companies put people before profits.”