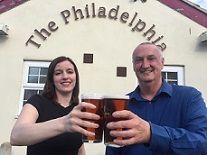 The Philadelphia pub is one of locals’ favourites, and the publican who runs it, Alan Williams, has recently reached a milestone anniversary of managing the pub for ten years.

Prior to running the Philadelphia pub, Alan had a successful career as a General Manager with the Navy, Army and Air Forces Institute. Ten years ago Alan joined Enterprise Inns and started running the pub in Houghton le Spring.

The Philadelphia has been a community focused and family friendly pub. Alan, the publican, holds regular entertainment for the locals, and has been a big supporter for the resident football and darts teams.

Congratulating Alan for his ten years’ milestone at the Philadelphia pub, Bridget Phillipson, Member of Parliament for Houghton and Sunderland South, said:

“There is no doubt that good local pubs, such as The Philadelphia, are an important part of the local community.

“It is my pleasure to congratulate Alan on his ten-year milestone of running the Philadelphia pub, during which time he has done a fantastic job in providing exceptional service for local customers.

“It is important to support the work of local pubs like The Philadelphia, and I thank Alan and the Enterprise Inns for arranging this.”

“Both Alan and the Enterprise Inns have invested in The Philadelphia which has become an excellent community local that meets the needs of all customers from the surrounding area. It is no surprise to hear of his ongoing success given the work he has done to raise money for several local charities through hosing a range of live entertainment evenings including quiz nights and karaoke nights”