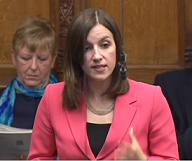 Bridget Phillipson, Member of Parliament for Houghton and Sunderland South, has pressed the government to halt the alarming shortfall in the number of GPs in Sunderland.

After local health professionals and patients raised concerns over recent months that the sharp decline in the number of GPs working in Sunderland is making it increasingly difficult for people to access GP services, Bridget asked David Mowat, Parliamentary Under-Secretary of State for Health, how the government intends to address the GP staffing problem and attract more family doctors to the city.

In response, the minister admitted that the government needed to do more to retain GPs, and promised to train more doctors in general practice over the coming years.

Speaking after the end of Health Questions, Bridget said:

“I know that local people are concerned about GP services. Many complain that it is almost impossible to get an appointment with their GP when they need it and are forced to wait for too long before they can see a doctor. Since early diagnosis is often crucial for those who develop life-threatening illnesses, these delays can have consequences for patients.

“I have also heard from local health professionals that GP services across Sunderland are under growing pressure and are underfunded. I was equally concerned to hear that it is becoming increasingly difficult to attract new doctors to the area and to retain those who are currently working there.

“Unfortunately, when I asked the Health minister to offer the people of Sunderland some assurance that the government has got a grip on this crisis, he was unable to guarantee that Sunderland will see any increase in the number of GPs in the near future.

“It looks like all the good work done by the Labour Government to address the shortfall in GP numbers in Sunderland is being undone by a government that simply doesn’t care about protecting the NHS.”