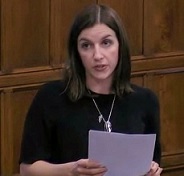 On Tuesday 25 October, Bridget Phillipson, Member of Parliament for Houghton and Sunderland South, contributed to a Westminster Hall debate on the future of the north east export industry following Britain’s decision to leave the EU.

The debate was well attended by members of all political stripes, who raised a number of important questions and concerns. In her contribution, Bridget emphasized the importance of Britain’s membership of the single market to the automotive industry in the north east, in particular to the continued success of the Nissan factory in Sunderland. She also pressed the government to include small and medium sized enterprises in any special protection measures to mitigate against the impact of Brexit.

A complete transcript of Bridget’s speech during the debate follows below:

It is a pleasure to serve under your chairmanship, Mr Hollobone. I am grateful to my hon. Friend Phil Wilson for securing this important debate about the future of our region.

Like many here, I made no secret of my preference for the UK to remain a member of the European Union, but a majority of people in my city and in the region voted a different way. Many people who voted to leave did so in the belief that a brighter economic future lay ahead for the UK and for the north-east. If their optimism is to be fulfilled, it is vital that exports from the north-east to the European Union are protected.

Export trade with the EU is critical to the north-east’s economy. The region is unique in England in being the only one to consistently maintain a balance of trade surplus. Last year, more than half our goods exports were to the EU, and the most recent figures from Her Majesty’s Revenue and Customs indicate that four of the five top export partners for the region are EU countries. Given that the proportion of exports destined for the single market from the north-east is relatively high compared with other regions of the country, those of us who represent north-east constituencies have a particular responsibility to raise concerns about the impact Brexit will have on the region’s economic interests, especially if the Government decide to take the UK out of the single market as well as the European Union.

As has been said, the automotive sector is central to Sunderland’s and the region’s economy and to the future success that lies ahead. A recent report by IPPR North found that the export of road vehicles, parts and accessories accounts for more than 40% of north-east goods exports to the EU and that the value of those exports grew by 118% in the past decade. Much of that trade depends on the continued success of Nissan in Sunderland and it is clear that future investment decisions by Nissan will play a major role in driving long-term economic growth in the north-east. Let us not forget that membership of the single market has been central to that success. The renaissance in car building in this country also demonstrates what can be achieved when Government pursues a focused, sector-led industrial strategy.

I sincerely hope that the decision on where to build the next Qashqai is a positive one for Sunderland. I will welcome any steps Ministers can take to assuage the company’s fears. What will require greater clarity from Ministers is the degree to which small and medium-sized businesses in my constituency and in the supply chain will be protected. Those businesses are already suffering from the collapse of sterling and the uncertainty that has dogged the economy since June. If Ministers intend to offer the automotive sector special protection from the impact of Brexit, presumably on the basis that they intend to take our country out of the single market, it must have wider coverage and not ignore SMEs in the north-east and beyond.

How do Ministers intend to act to safeguard the interests of the rest of the manufacturing sector in the north-east? What of the growing and thriving tech and software start-ups in my constituency, in Rainton Bridge and elsewhere? The region’s current strong track record on exports is a source of pride, but we still face the highest level of unemployment in the UK and a skills gap that holds back our young people as well as our economy. We can ill afford to see a decline in jobs, wages and living standards. As the North East local enterprise partnership has pointed out, we are a region that needs EU funding more than most-and we have a track record of investing it well. I note the guarantee offered by the Chancellor, but the north-east was originally allocated £437 million in EU structural funds up to 2020. Of that central pot, at present more than £198 million remains unallocated. There is clearly room for improvement.

In the north-east we have long needed Ministers to add some substance to the so-called northern powerhouse-a concept that appears to have fallen out of favour with the new Government. Now more than ever we need the Government to use all of the powers and levers available to them to support our region and its people to fulfil our economic potential in these difficult times.

To watch Bridget’s contribution to the debate, click here.