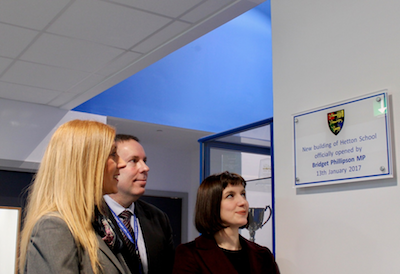 After years of campaigning, Bridget Phillipson, Member of Parliament for Houghton and Sunderland South, officially opened the new buildings of Hetton School on 13 January 2017.

Bridget was joined by a host of dignitaries including the Mayor, representatives from the Education Funding Agency and builders Galliford Try.

Visitors were given tours of the new school by students taking the chance to show off their new building and some of the amazing work they and the other students do.

Hetton School was founded in 1912 and originally listed in Labour’s Building Schools for Future project, which was scrapped by the Coalition Government in 2010.

In 2012, the school was one of 261 which the government announced would be rebuilt as part of its North East Priority School Building Programme. However, little progress was made in the years that followed as the Treasury struggled to fund the programme.

Bridget consistently raised awareness of the plight of Hetton School during this period. She repeatedly raised the issue in the House of Commons and met with then Minister for Schools David Laws MP.

That meeting secured £400,000 in additional funding for a new speech and language unit and a commitment from the Department for Education that Hetton School would be awarded ‘first school status’, giving the school head and his team a greater say in the design and construction of the new buildings.

The first turf for the new building was finally cut in March 2015 at a ceremony attended by Bridget and other local dignitaries. Just under two years later, the students and teachers of Hetton School can finally celebrate the official opening of the new school buildings.

“This has been a long journey to get here.

“I am delighted for the staff, students and the whole Hetton community.

“This new building is well deserved and I’d like to wish the school and its students every success in the future.”

“Since September the students and teachers have found a very different learning environment to that which they left -; one which is clean, fit for purpose, modern and provides the very best chances for all our learners for many years to come.

“New facilities and furniture can be seen in most areas of the school, not least with new tables, chairs and equipment storage in every classroom.

“New fold-away dining tables allow larger friendship groups sit together at break and lunchtimes, and mean that the dining hall feels more like a social area. “

“I am so happy to be able to welcome everyone to our new home. I’m also very proud to be part of the Hetton School community.

“I firmly believe that our students are at the heart of our school in our new buildings, as the saying goes, ‘home is where the heart is’.”