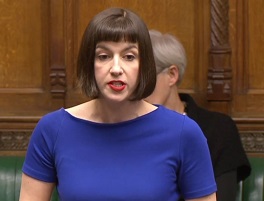 On Monday 16 January 2017, Bridget Phillipson, Member of Parliament for Houghton and Sunderland South, grilled the Communities Secretary over the funding crisis facing the adult social care system in England.

The amount of money allocated for social care has fallen significantly in recent years as local authorities have struggled to absorb what amounts to a 40% real terms reduction in government funding to councils over the last Parliament. As a result, the social care system in England is now on the brink of collapse.

Failures within the system have a considerable impact on an already stretched and underfunded NHS, as increasing numbers of elderly and vulnerable people are forced to go to A&E to access the care they need. According to the British Medical Association, the cost to the NHS of bed days occupied by patients no longer in need of acute treatment is estimated to be £820 million.

Speaking after DCLG Questions, Bridget said:
“In Parliament, I raised the important issue of the crisis facing adult social care, which I know many people in our area are deeply concerned about.

“Government plans to allow local councils to increase spending on social care will not be nearly enough to address what the Local Government Association estimates will be a £2.6 billion funding gap by 2020.

“These plans will also do little for the north east. Instead, increasing the social care precept will only worsen the existing postcode lottery.

“That’s why today asked the Communities Secretary to accept that only an urgent injection of additional ring-fenced funding will solve this crisis. Unfortunately, he refused to commit any additional resources towards tackling this problem.

“We can’t go on like this. Government ministers must accept that the current funding structure for adult social care is simply unsustainable.”