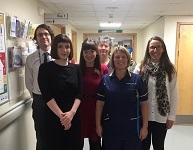 On Friday 13th January 2017 I met with Dr Harriet Mitchison, Consultant Gastroenterologist and her colleagues at Sunderland Royal Hospital to discuss the negative health impacts of cheap alcohol, which can be readily found in shops.

During my visit we discussed findings from a recent report published by Alcohol Health Alliance (AHA) in November 2016 highlighting the worrying trend of cheap and high-strength drinks dominating the alcohol market.

I also visited Dr Mitchison’s ward where alcohol-related trauma, injuries and diseases are treated. A number of patients were kind enough to speak with me and discussed the impact of alcohol abuse on their lives.

For many of Dr Mitchison’s patients, the most popular drink is a kind of high-strength white cider sold at an astonishing price as low as 16p per unit.

According to AHA’s report, this type of high-strength cheap white cider is also predominantly drunk by dependent and underage drinkers. At this rate, the average child’s weekly pocket money of £5.75 could buy more than double the adult weekly recommended alcohol limits.

In 2014-15 there were 345 hospital admissions due to liver disease in my constituency of Houghton and Sunderland South. According to the NHS, the number of people with alcohol-related liver diseases has been on the rise in the UK in recent years, as a result of increasing levels of alcohol misuse.

The Coalition Government previously considered introducing a minimum unit price to tackle the health harm caused by the cheapest and strongest alcohol. However, under the pressure from the alcohol industry lobby, ministers backed down and decided to postpone its introduction.

The former Chancellor of the Exchequer, George Osborne introduced a series of alcohol duty cuts, claiming that the cuts would protect local pubs. However, evidence has since shown that these cuts have done nothing in helping local pubs that are faced with closure.

I have long been a supporter of our local pubs, as they are important local businesses in the heart of many communities providing a safer and more controlled environment for drinking. Instead, pubs continue to be threatened by closure whilst the proportion of alcohol sold from supermarkets and other off-trade premises has reached record levels.

Unregulated alcohol prices have done much damage both to our pub community and public health. I believe it is time to have a debate on introducing a minimum unit price for alcohol again.