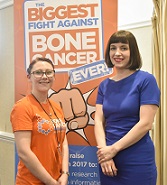 On Wednesday 1st February 2017, Bridget Phillipson, Member of Parliament for Houghton and Sunderland South, met with her constituent and a local campaigner for bone cancer, Zoe Davison, at The Biggest Fight Against Bone Cancer campaign event at parliament.

Ms Davison is from Houghton-le-Spring and works for the organiser of the campaign, the Bone Cancer Research Trust. It is a Leeds-based small charity that provides information and raises awareness of primary bone cancer, a rare albeit serious condition that can affect people of all ages. The Trust was founded in 2006 and relies entirely on the support from the public to fund their work. Ms Davison extended the invitation to Bridget Phillipson as her local MP to attend the event to support the campaign.

“I was pleased to meet Zoe in Westminster to support her organisation’s important work to fight against primary bone cancer.

“Contrary to the common notion that cancer often affects older people, primary bone cancer can affect children, teenagers and young adults alike. Around 500 cases are diagnosed in the UK each year, and we still don’t know what the risk factors are for the disease.

“Unfortunately, as the condition remains not widely well-known, many people don’t get a correct diagnosis until their cancer is already quite advanced.

“We need charities such as the Bone Cancer Research Trust to continue raising awareness of the condition, providing more information on the symptoms, tests and treatments, as well as support and counselling for those affected. That is why the campaign has my full support and I encourage people to get involved and support it too.”

More information on the campaign and how to support it can be found via thebiggestfight.org.