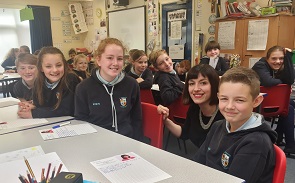 On Friday 7th July Bridget Phillipson, Member of Parliament for Houghton and Sunderland South, joined year 6 pupils at St Leonard’s RC Primary School in Silksworth in discussions of improving parking in areas near the school and the mock General Election the pupils held as a way of experiencing the election and taking part in political debates.

At the Golden Assembly on Friday, pupils in year 6 came together to discuss solutions to tackle parking congestion around the school. The discussions and suggestions were very constructive, with many good ideas put forward to teachers and parents present.

After the Assembly, pupils in year 6 shared with Bridget Phillipson MP the results of a mock General Election they held during the snap General Election in June. This was a project designed for pupils to understand how elections and political debates work, and for them to experience being a part of it themselves.

“I’m grateful to the head teacher Mrs Bernie Doherty and school staff for organising my visit. I’m delighted to see pupils to take an interest in politics and local issues, and actively participate in such an innovative and engaging way.

“It is crucial for the future of our democracy to encourage more young people to be interested in politics and get involved in debates about national and local issues. During the snap General Election in June we saw a big increase in turnout all across the country. This is a fantastic progress I think we must build upon. More exposure to politics for pupils at school is definitely a very important part of it.”