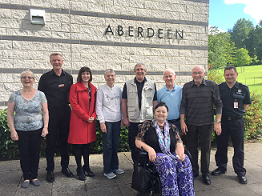 Bridget met with Ozzie Braithwaite, Chair of the LRA and local residents to discuss the measures that housing association Gentoo have taken since the fire to ensure the Lakeside Towers are safe for residents. She was accompanied by staff members from Gentoo and Chris Lane, a Station Manager in Sunderland from Tyne and Wear Fire and Rescue Service (TWFRS).

The residents expressed their thanks for the support and reassurance that they have received from Gentoo since the fire at Grenfell Tower. Bridget also witnessed a demonstration of the fire alarm system in Aberdeen Tower to understand the robust processes and procedures that Gentoo have in place to protect their buildings from the risk of fire.

All fire alarms in Gentoo’s traditional high-rise blocks are linked to its concierge service and to Sunderland City Council’s Alarm Receiving Centre. The concierge has full remote access to fire alarm systems in all blocks, which enables them to clearly identify the source of an alarm. The concierge has 90 seconds to communicate with the resident to identify the cause of the alarm. After 90 seconds, the activation is automatically related to Sunderland City Council’s Alarm Receiving Centre, which then automatically notifies TWFRS.

In the event of a fire alarm activation, all doors on the entry system unlock, allowing access for firefighters and evacuating residents. Fire alarms are located in individual dwellings and communal areas and are tested regularly. Gentoo and TWFRS also carry out fire risk assessment checks on each high-rise building once a year.

Gentoo manage 23 high-rise tower blocks, of which 20 have some form of cladding and insulation. Last month, CEO John Craggs assured residents that none of the high-rise blocks owned by Gentoo have the same cladding and insulation as appears to have been on Grenfell Tower. He also confirmed that the contractors and sub-contractors referred to in the tragedy have not been used within Gentoo.

However, following testing by the Building Research Establishment on samples of cladding panels, Gentoo took the precaution of removing cladding from five high-rise blocks in the St Peter’s area of Sunderland. None of the Lakeside Towers buildings were affected.

“It was very helpful to visit the towers at Lakeside today to speak to residents face to face and hear their concerns about fire safety following the dreadful blaze at Grenfell Tower last month.

“I was pleased that they felt so reassured by the help and support that Gentoo and Tyne and Wear Fire Rescue Service have offered since the fire.

“I was also very impressed to witness the fire alarm system in one of the towers first hand. It’s clear that Gentoo have robust procedures in place to mitigate against the risk of fire, and that staff are doing everything they can to make residents feel safe.

“The fire at Grenfell Tower was a national tragedy that should never happen again. We all need to learn lessons from this terrible event, and I hope that the public and police inquiries get to the root of what went wrong.

“We certainly need to know as soon as possible whether the existing statutory and regulatory requirements on fire safety are fit for purpose.

“It may also be the case that all flats in high-rise buildings have to be fitted with sprinkler systems.

“If so, the government should spare no expense in giving housing associations like Gentoo the resources they need to carry out this work.

“We must do everything possible to make every high-rise building in the country safe from fire.”